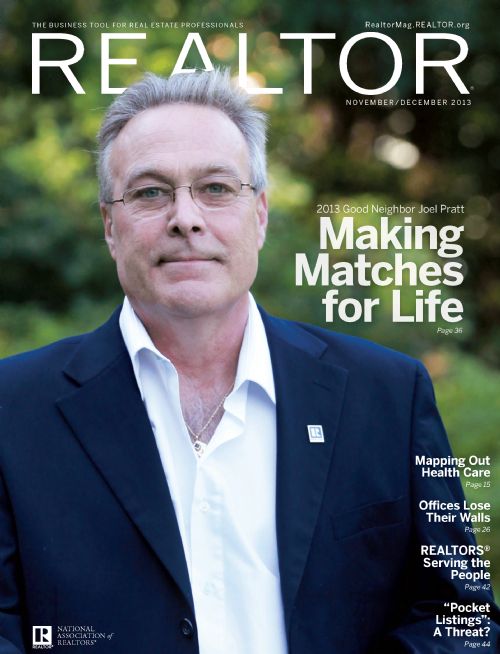 The Good Neighbor Awards, which is now in its 14th year, recognizes REALTORS® who have made an impact on their communities through volunteer work. This year’s dinner, held at the Westin San Francisco hotel, had a record turnout of 180 attendees, including the highest number of past and present Good Neighbors who came to support the newest inductees to the Good Neighbor Society.

The five 2013 Good Neighbor Awards winners — who were each given $10,000 grants toward their charities — were recognized in front of 6,000 REALTORS® earlier in the day at the General Session, where keynote speaker Hillary Clinton highlighted each of their efforts individually and thanked them for their important work.

“You all are an incredible inspiration to all of us as leaders in your community,” Pamela Kabati, NAR’s senior vice president of communications, told the audience at the dinner.

It was a particular show of appreciation and commitment to Good Neighbors that Davis was able to make it to the reception, coming all the way from Boca Raton, Fla.: He underwent quadruple bypass surgery just nine days prior.

He spoke of his work with The Rotary Club of Boca Raton, mentoring underprivileged children at a charter school and helping them attain a high school diploma.

“Some of these kids have no parents at home, they struggle with drugs and alcohol, sometimes they’re immigrants,” Davis said. When they finally get their high school diploma, “you’d think they were getting their master’s degree, they’re so excited. … You see them embrace the confidence that comes with realizing a dream.

“Giving to people less fortunate makes you appreciate your blessings,” Davis continued. “We know we can’t save them all, but we’re giving each one a chance.”

Bernice Helman said her commitment to the United Way of the Wabash Valley is deeply personal. It’s because of the struggles in her own life that she believes so strongly in giving back to her community in this way.

“My family was destroyed by drug abuse for 32 years,” she said. Her brother had fallen into a life of drugs and is now serving jail time for using and distributing meth and operating a meth lab, she said. She’s watched her brother’s children go down the same destructive path.

“We all have struggles and crosses to bear, but you never have to look far before you find a neighbor with a bigger problem than yours,” Helman said. “I have learned that if you make a commitment to do good and pay it forward, your life will be blessed. … I know I can’t solve the world’s problems, but I know I can help innocent children who are victims of other people’s poor decisions.”

For Tina McDonough, her tireless efforts to assemble a team of fundraisers for Susan G. Komen for the Cure is about celebrating life, not reviling death. She’s supported many women battling breast cancer, and she remembered how many of them felt hopeless. That’s exactly why she does what she does.

“People need hope,” McDonough said. “This is life or death for so many.”

She recalled a friend who was diagnosed with breast cancer and feared that if her diagnosis had come 20 years earlier, before the advancements made in breast cancer research, she would have been destined to die young.

“Every major advancement in breast cancer research has come from a Susan G. Komen grant,” McDonough said. Her $10,000 grant will be used to reward her team members for raising money for the organization: The first 10 members to raise $1,000 in new donations will get a $1,000 cut of the grant, she said. “It helps me motivate my [team] to get them out of their comfort zones and find new donors. This team will never give up because everyone deserves a lifetime.”

Joel Pratt learned how to turn tragedy into a miracle, telling of the death of his beloved wife and how it fueled his desire to help others through MatchingDonors.com, a site that matches living donors with patients who need an organ transplant.

“Losing a life taught me how to save a life,” said Pratt, whose wife died in 1998 after a three-year battle with breast cancer. “I feel undeserving of this award because the real heroes are those organ donors who joined MatchingDonors.com.”

Pratt asked everyone in the audience to spread the word about MatchingDonors.com, saying every referral could potentially save a life – perhaps one of the 19 people that die every day waiting for a transplant.

“I’m looking to you, my fellow REALTORS®, to help me save more lives by telling everyone you know about MatchingDonors.com,” he said. Pratt plans to use his $10,000 grant to pay for 18 lifetime memberships to Matching Donors.com for patients and organ donors looking to help.

A wish comes true for Kristina Rhodes every time one is granted for a child in need, Rhodes said. She recalled several kids who touched her heart during her time volunteering for the Make-A-Wish Foundation.

There was the young girl suffering from a debilitating muscular disease who wished for a computer to keep in contact with friends and family so she didn’t feel so alone; a brother and sister with a rare skin ailment who wished to play baseball with the Yankees and go on a shopping spree on Rodeo Drive; a young boy battling cancer who dreamed of a trip to Hawaii.

“With each and every wish I grant, my passion increases,” Rhodes said. “As a wish granter, I get to witness firsthand the impact a wish has on a child’s life.”

She said that there are far more people out there who need a wish granted, and she encouraged more people to get involved with Make-A-Wish.

“This is a time to celebrate life, not focus on illness,” Rhodes said.

To continue supporting REALTORS®’ charitable efforts in their communities and to support new projects, the Good Neighbor Society announced at the dinner that it is expanding its mentorship program. It will now offer advice to any REALTOR® working on a charitable project. Contact Sara Geimer at sgeimer@realtors.org and a member of the society will respond to requests or identify the right person to address questions.